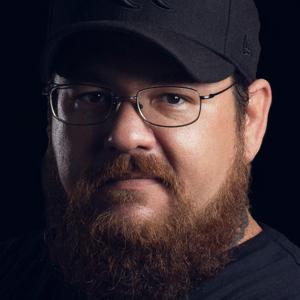 They’re rich with tradition. But for Hart & Huntington tattoo artist Mark Fernandez, who specializes in the style, sometimes those traditions are made to be broken.

Japanese style tattoos concern the myths, lore and history of Japan. Think koi fish, lotus flowers, ferocious dragons. But what makes the style unique from others is its ability to flow throughout the body.

It puzzle-pieces together full body suits. A piece on the arm and chest, for example, is connected by the same background, making it flow on the body.

Mark maintains this aesthetic throughout all his work, but he comes at it with a more contemporary approach.

Whereas traditional Japanese tattoos are based on solid line work and shading, Mark’s approach is much more intricate and meaningful. 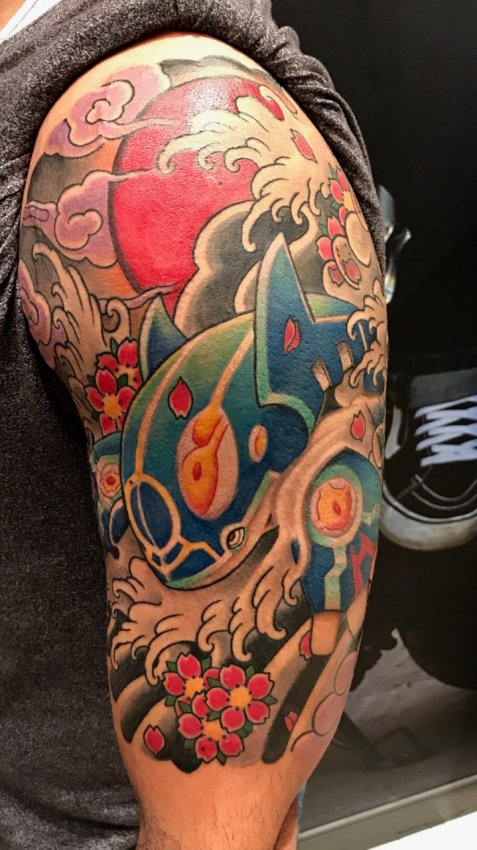 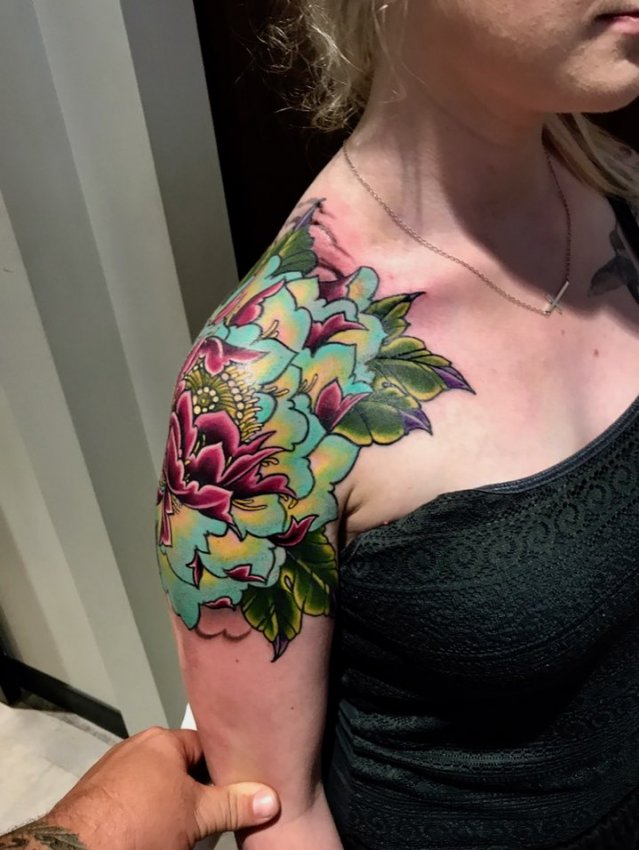 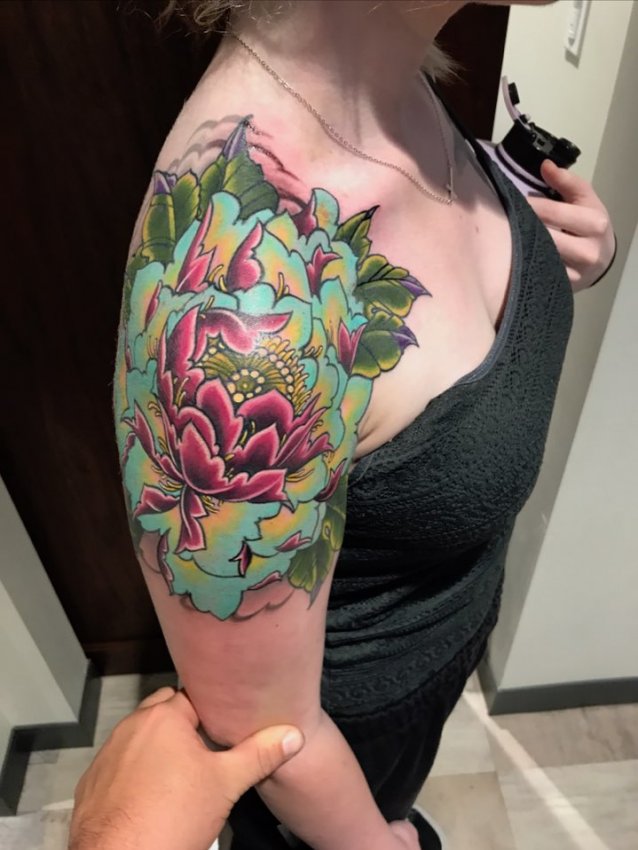 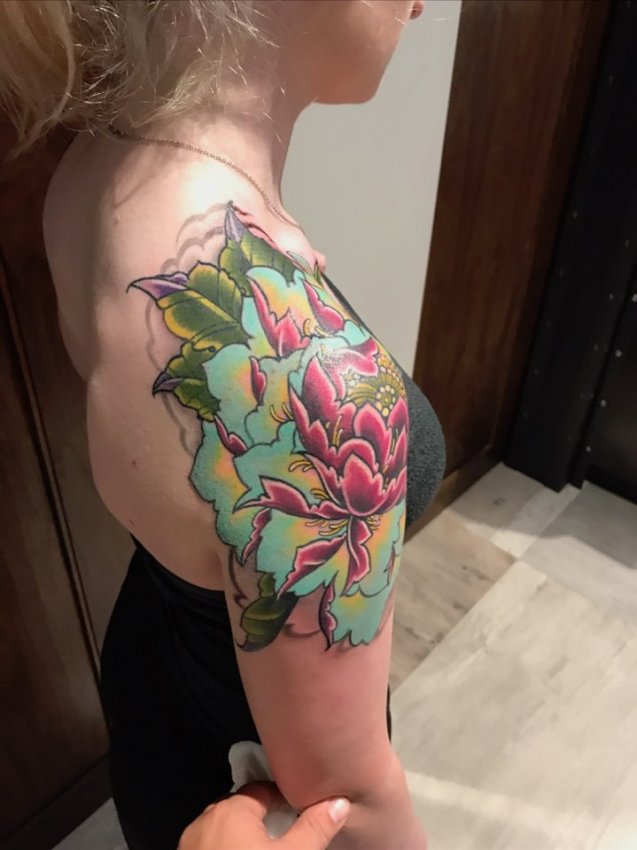 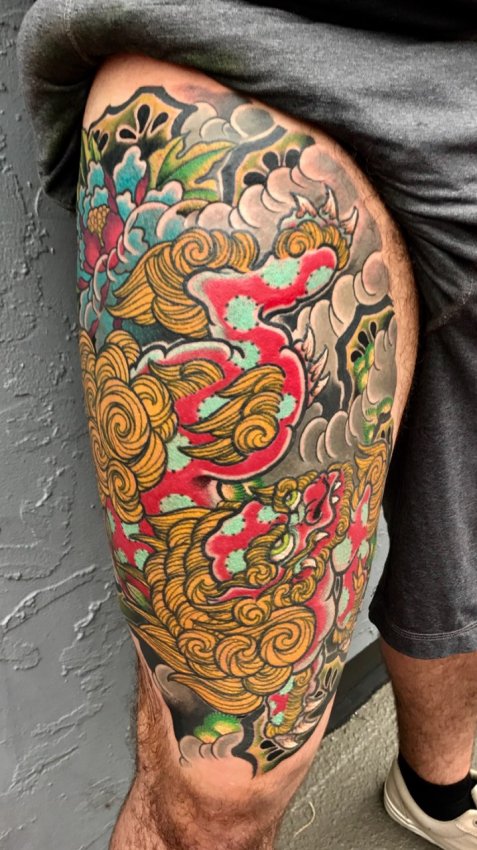 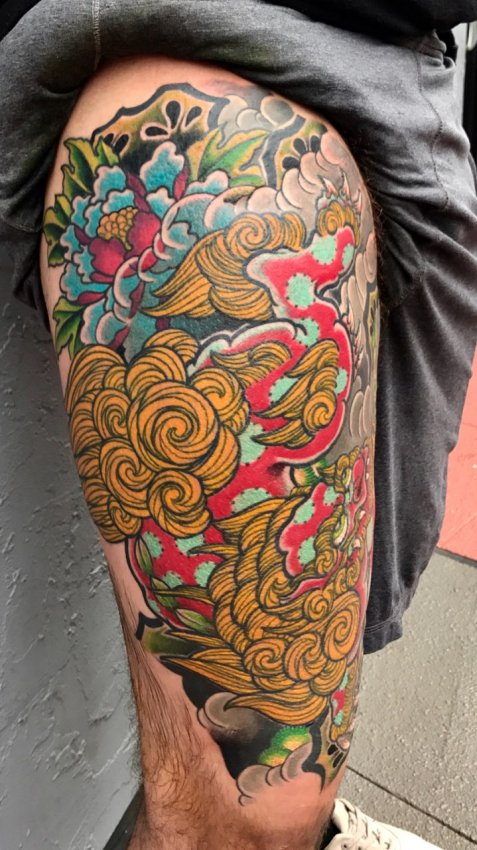 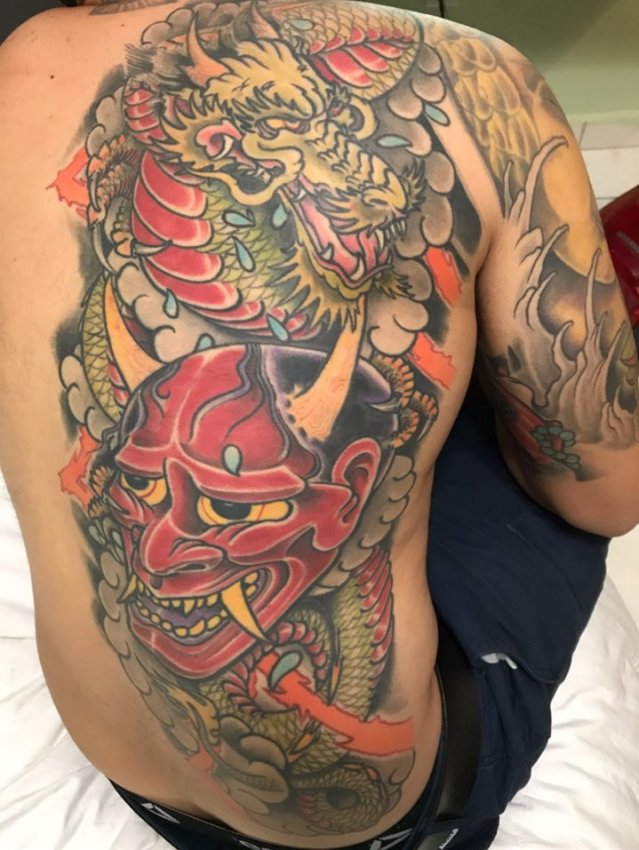 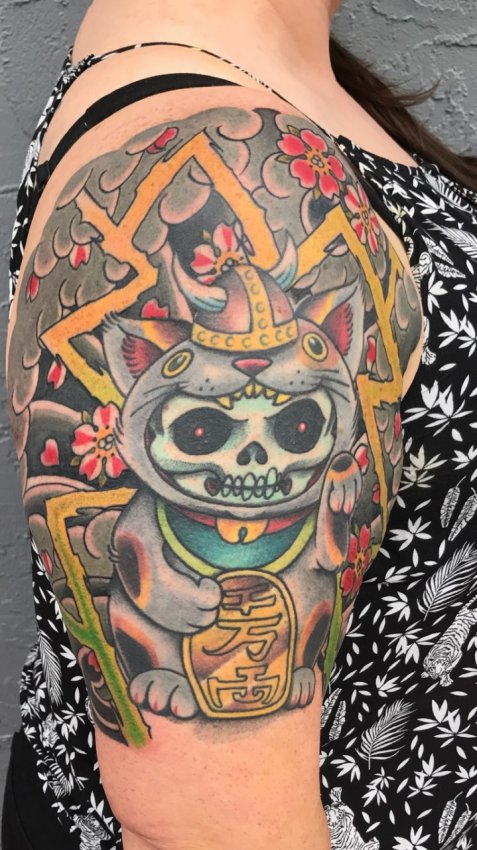 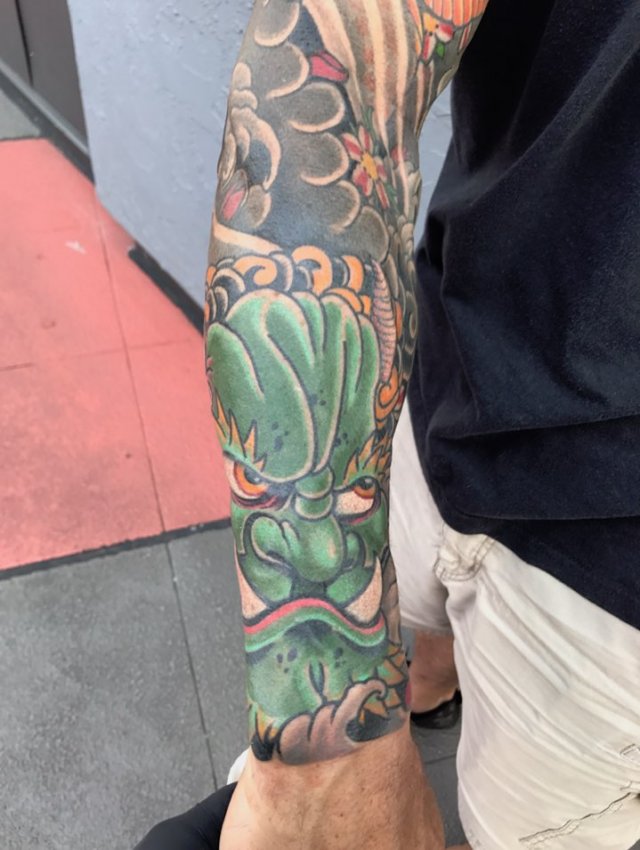 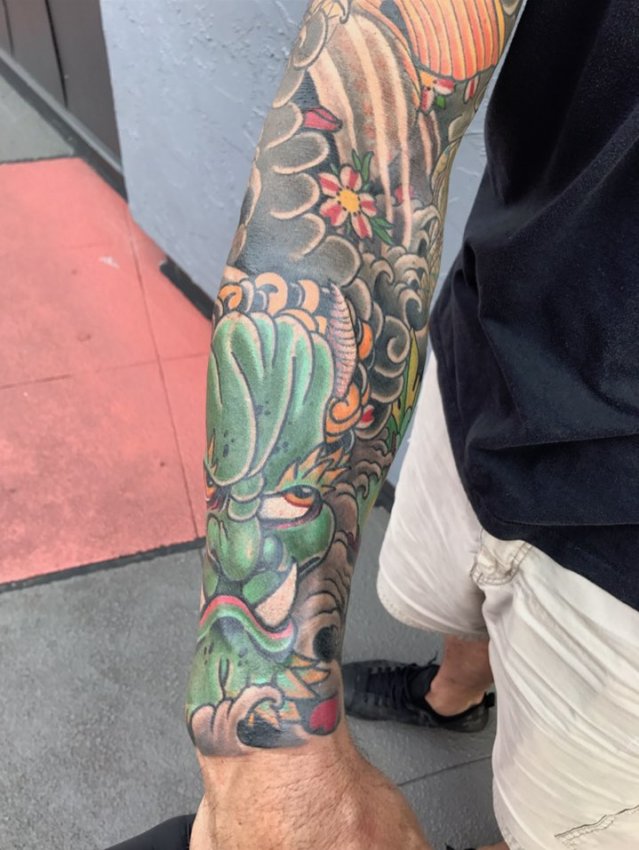 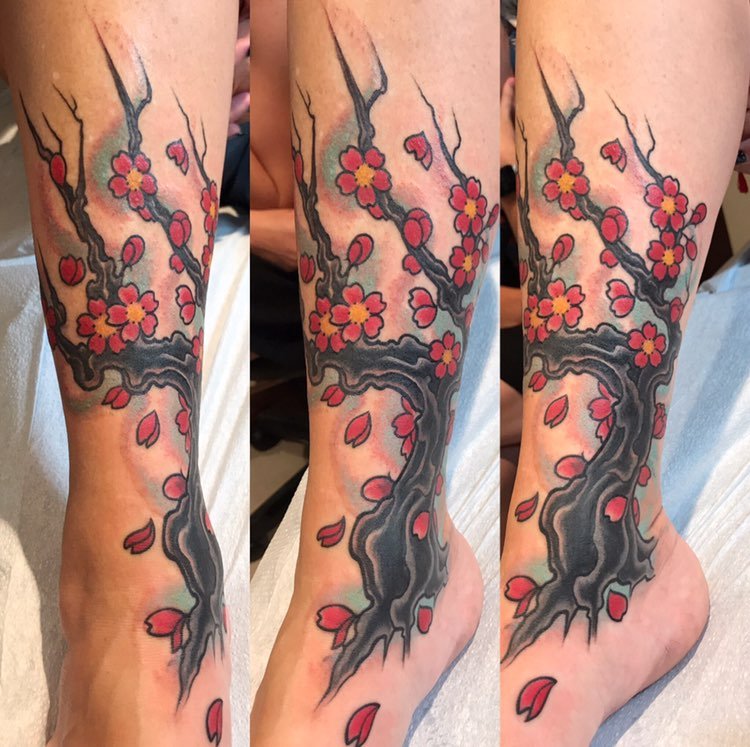 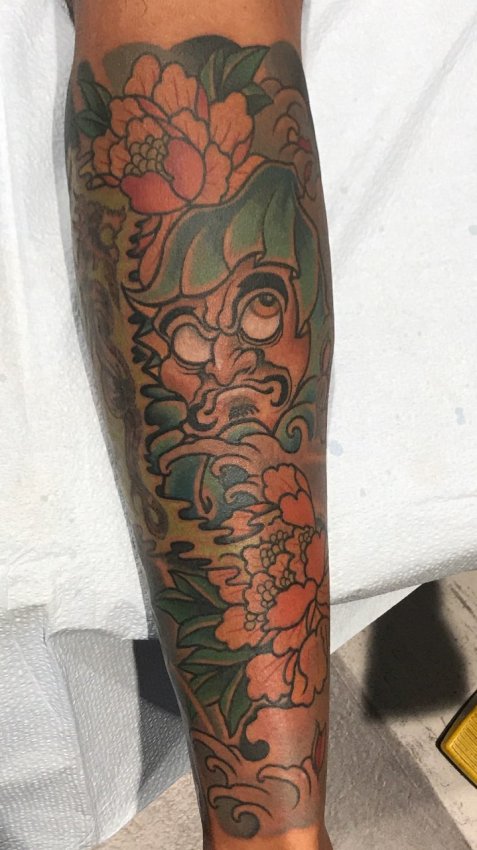 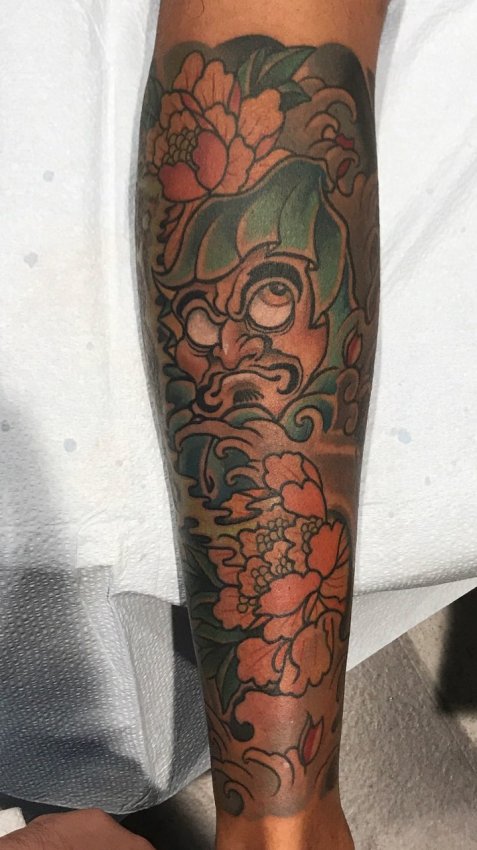 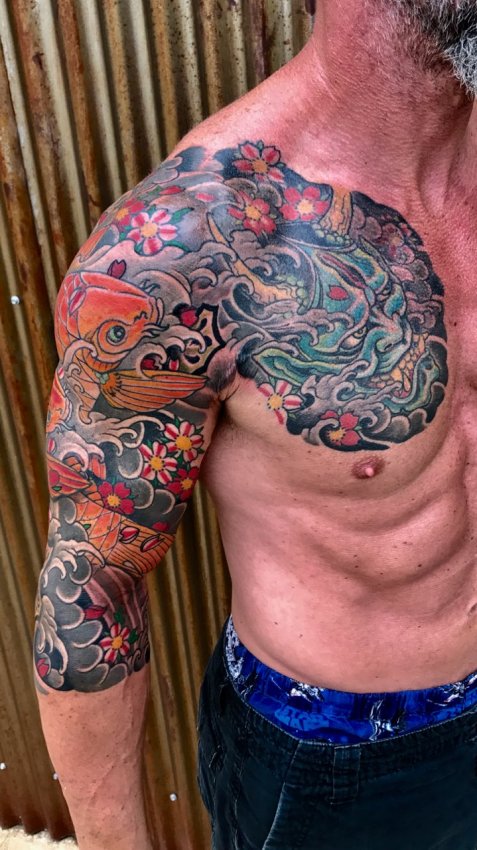 If you’re looking at a tiger, you should be able to see it from 15 feet away. I don’t think you’ll ever find a better example of fine tattooing than the Japanese aesthetic.

But like the original Japanese tattoo artists, Mark respects the art form and its heritage.

The first couple of years I started tattooing, I was doing small little decorations; nothing big. But then I met an older tattoo artist who introduced me to the Tattootime books by Ed Hardy, and that was probably the first time I ever saw bodywork style tattooing.

It rocked his world.

I remember immediately noticing that whoever had done the tattoos pictured in that book was obviously a master. Tattoos are a whole different game when they span a bigger portion of the body, how they curve and bend to fit the human form. It made a big impression on me, and I remember thinking ‘you can’t get any better than that.’

From that day, Mark aspired to master the Japanese style, to become just as good as the artists he saw in the book.

I remember seeing how well it all came together, how there were no clunky spots or places where different tattoos seemed to crash. It was seamless. You couldn’t tell where it started or stopped.

He’s been putting his own spin on the Japanese style for quite a few years now and has fallen in love with it even more. Especially the sense of empowerment it gives people.

Historically, the Japanese body suit was reserved for warrior culture within Japan. Only samurais and gang members got tattooed, so this style definitely has a bit of an intimidation factor to it. But at the same time, they’re just beautiful to look at.

That’s because the tattoo style works with the natural shapes of your body.

You’re not getting that one piece on your chest, you’re getting your whole chest and torso and sternum. It flows along with the form and accentuates who you are as a human.

That’s because there’s so much symbolism behind each element of a Japanese tattoo.

For example, a koi fish swimming upstream might symbolize that you’re persevering through a struggle. Cherry blossoms falling in a background symbolizes the passing of time, the change in the seasons. Peony flowers are known as warrior flowers in Japanese culture because they put up a hard fight to live and thrive. The Japanese culture is very aware, and there’s something super pure about it.

I once had a guy come in who was an officer for the U.S. Air Force. He’d been stationed in Okinawa, where he had the opportunity to soak up some of the native culture. He told me that, every time he went into a temple or walked past a holy place, he noticed the foo dogs on either side of the entrances. He was told they guard the knowledge and emotion going on within those walls.

So Mark tattooed two foo dogs on him, one on the front of each thigh.

They guard his body, his temple.

Another one of Mark’s clients, an engineer from the Midwest, sat with him to have a single koi fish tattooed on him. He worked for a company that sent him out to Japan on occasion to repair their heavy equipment, and the artistic style there really made a mark on him.

Originally, he wanted a koi fish and a lotus flower, but changed his mind on the flower in exchange for cherry blossoms because of the different symbolism behind each. 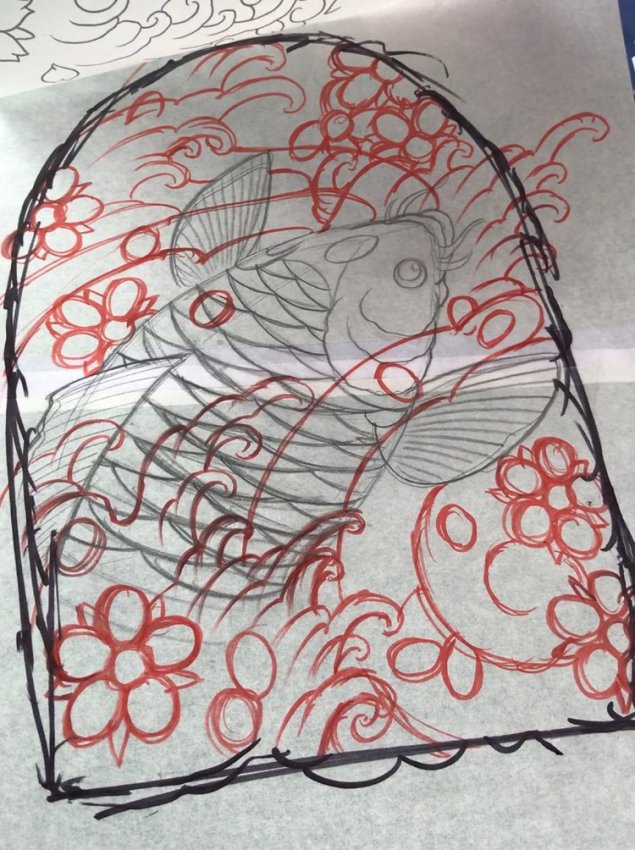 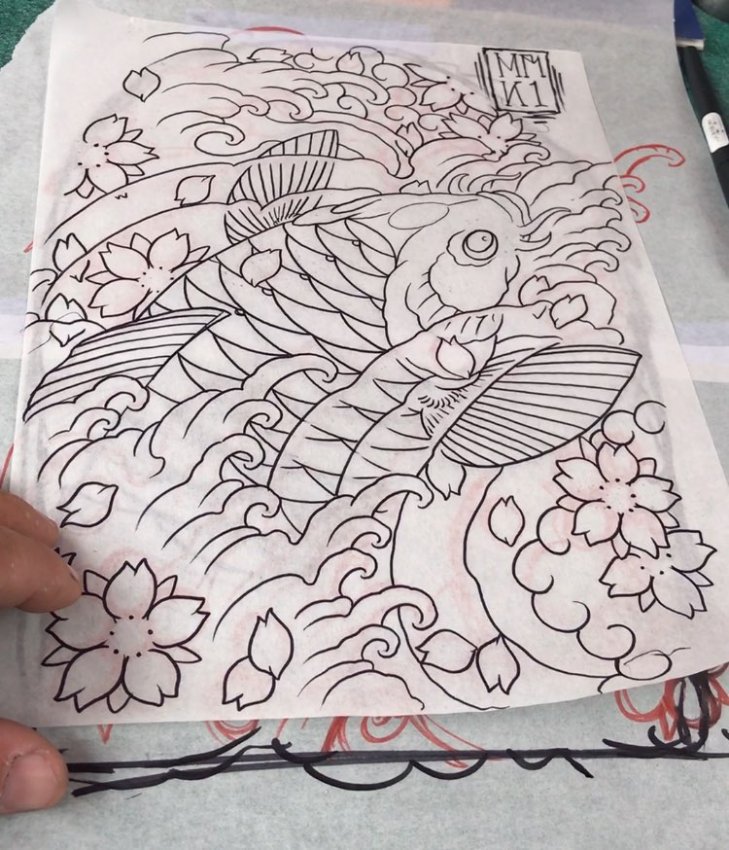 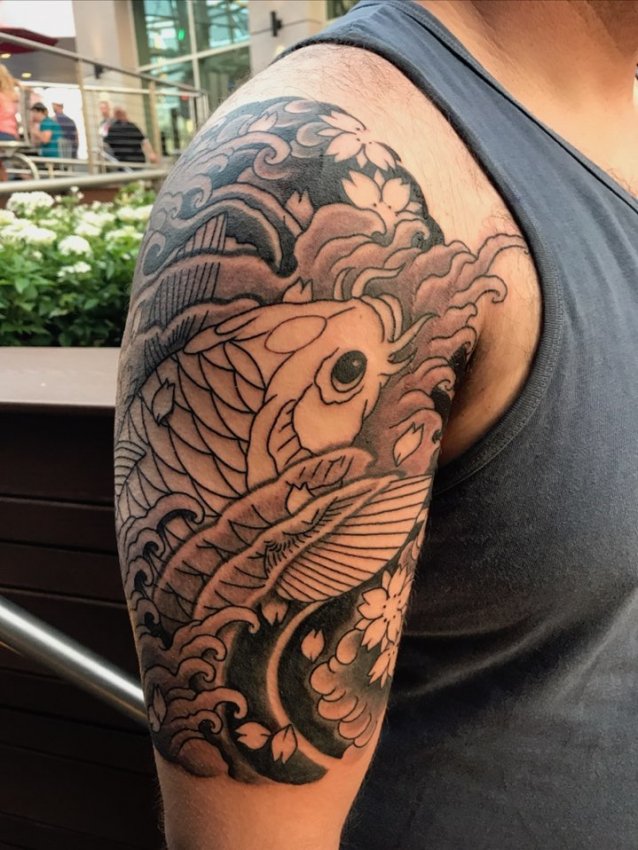 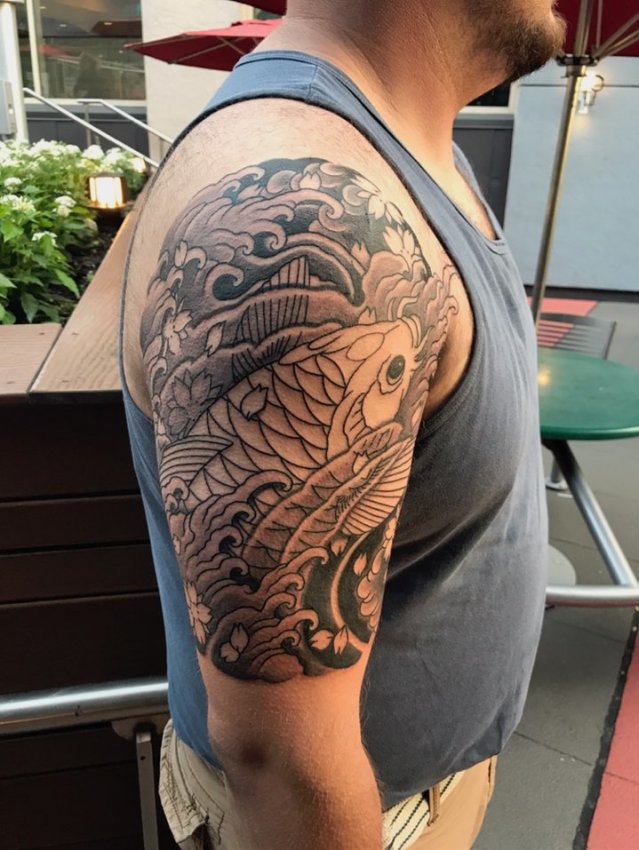 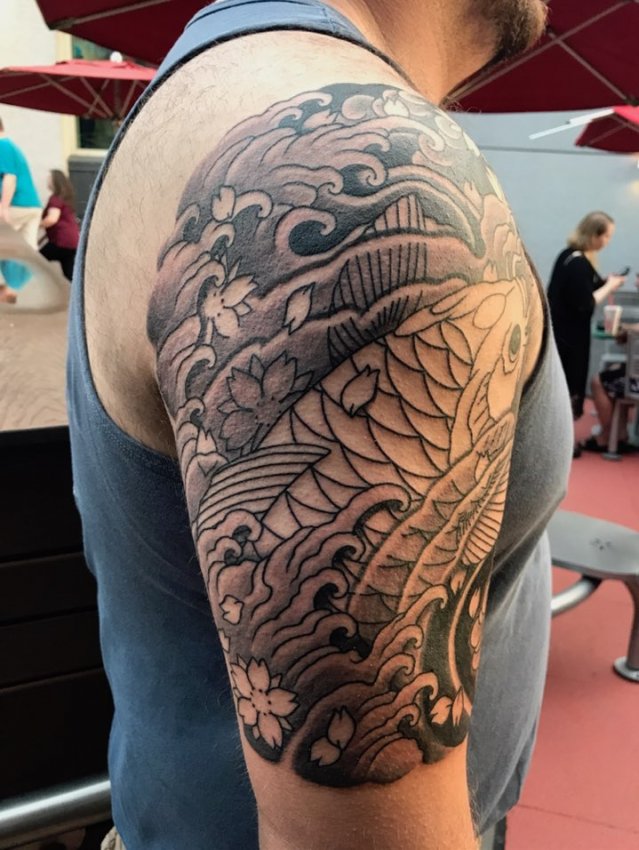 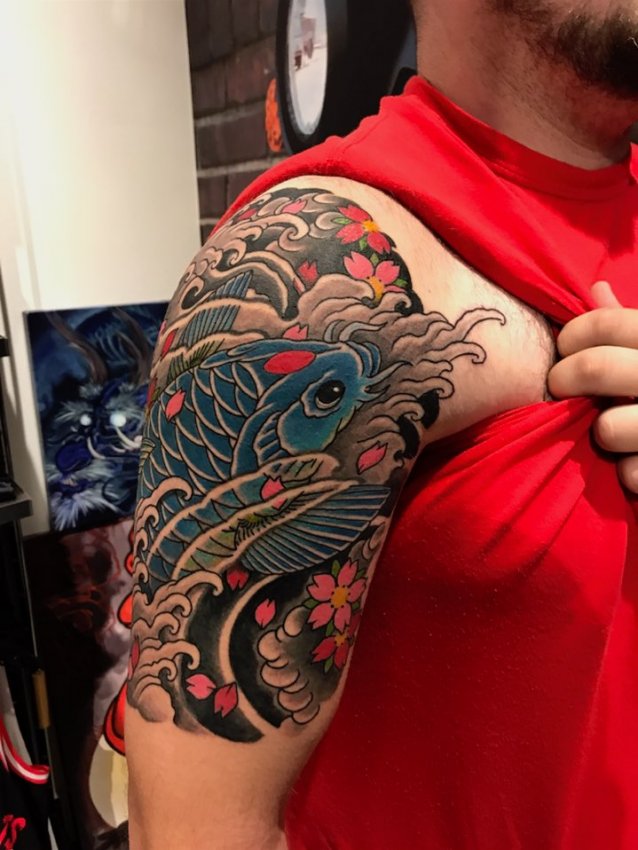 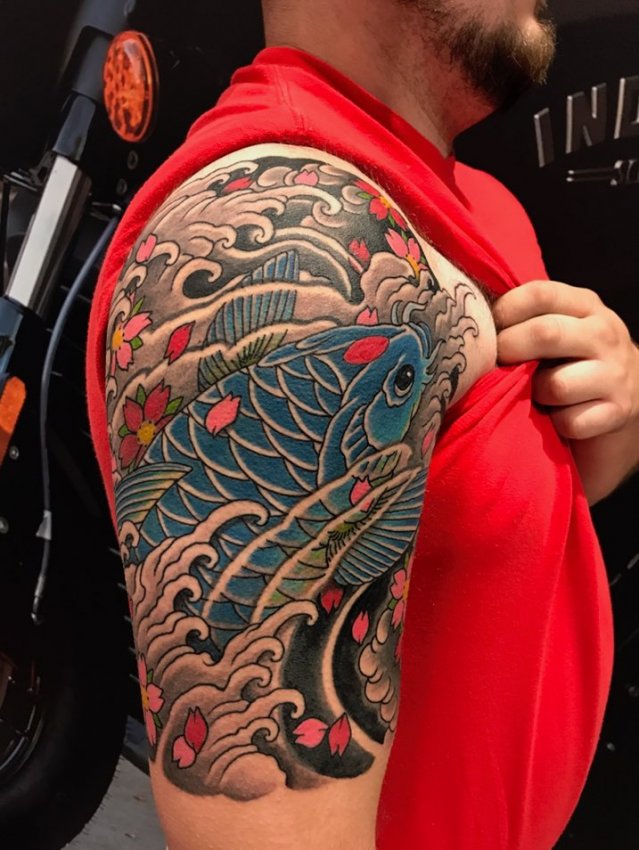 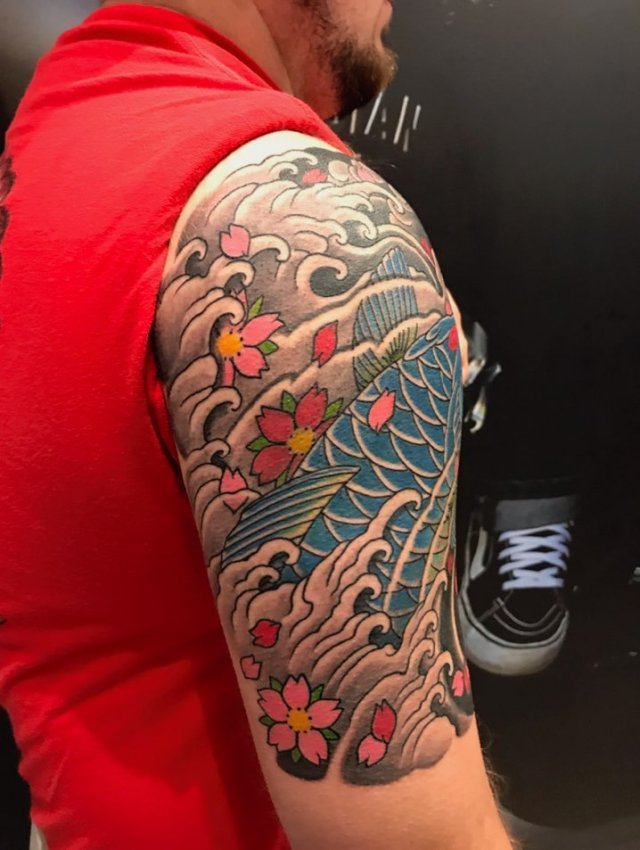 The same goes for colors.

It’s a style that endures, too.

It’s a type of tattoo that just lasts longer, especially here in Florida where a lot of my clients tend to be sun worshippers. It doesn’t fade as easily as some of the other styles that rely more heavily on color.

To Mark, the best Japanese tattoos are a result of trust.

Traditionally, you’d meet up with a master, tell them about your life and he would determine and tattoo the subject matter that he felt pertains best to you. Unlike American tattoos, where you come into a shop and tell your artist exactly what you want and where, Japanese style lends itself better if you let the artist do their thing.

You’re surrendering to a person you’ve maybe never met before. But it’s totally worth the risk.

It’s an aesthetic that lends itself well to folks who want to get heavily tattooed. It’s an opportunity to show the value to your life. 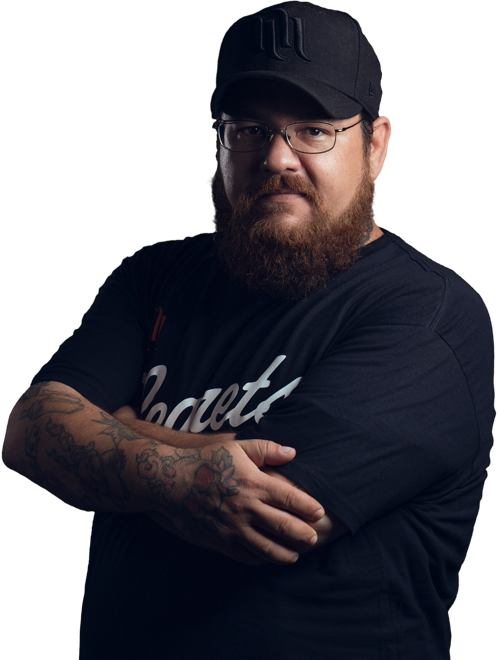 Request an appointment with Mark

The Mecca of Harry Potter Tattoos.
Never worry about being too nerdy here. We’re connected to...
The Haunting at Hart & Huntington
Ok no, none of our shops are haunted. (That we know of.) But...
Neotraditional tattoos are anything but…
”Neotraditional tattoos have all the foundations of American...