Artists featured in this article 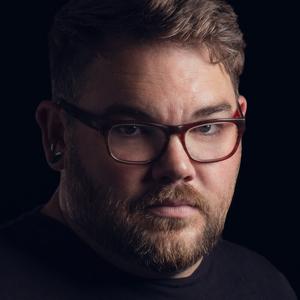 We sat down with Orlando tattoo artist, Isaac Bills, to discover the path that lead him to H&H Orlando.

What was your earliest memory of creating art?

I was sitting in my parents Plymouth Reliant station wagon. We had packed up the car and were getting ready to go back home. I had a sketch book in my lap and a copy of National Geographic. There was an eagle on the cover or a page inside. This was the first time that I sat down with a photo reference and decided to try to copy it. I was sitting there for at least 20 minutes and got a fairly accurate drawing of this eagle. I think I was seven or eight years old. I remember a lot of things about that moment.

What was your first experience with tattoo?

Right when I turned 18 I got my first tattoo with my brother. It’s a keltic knot on my shoulder. My brother and I went and got it together. He’s a little older than me. It’s like a family tattoo. I got a couple more that first year.

After a while Isaac became friends with the guys he was getting tattoos from. He started hanging out at their shop.

Eventually, they just put me to work behind the counter. I was there hanging out one day and the phone rang, but everyone was busy. “Hey can you just grab that?” [laughs]

Since Isaac could draw well, eventually he started drawing tattoos for clients. After about a year and a half of hanging out and doing errands, they offered him an apprenticeship.

The first time they offered me, I was terrified and instantly said no.

I thought about the idea of learning to tattoo but it scared me so much. I didn’t think I was good enough.

Isaac keep working at it, and a few months later the shop asked him again about an apprenticeship. He was ready to dive in.

I had a pretty typical apprenticeship…a lot of learning how to build needles, scrubbing tubes, setting up and tearing down for my boss’ tattoos and just generally taking shit from everyone [laughs].

Isaac worked there for a year out of his apprenticeship. And then the relationship started to sour.

I wasn’t really getting a lot of help from them. They weren’t happy about my progress but they weren’t helping me. I think they thought because I was asking questions that I didn’t think I needed to learn. But I was so green to all of it, I didn’t know what I was supposed to be asking. I think that’s where a good teaching defines themselves as a good teacher—you don’t let a student fail.

When Isaac left his first shop, he had an opportunity to go back to what he went to school for—cooking. But when it came down to it, he realized he really enjoyed tattooing.

Eventually he found another shop, and ended up meeting some good artists there. From there he went on to an even better shop and stayed there for about seven years. And then he moved to H&H Orlando and he’s been here six years now.

If there was one thing that you could tell your younger self, what would it be?

The only shortcut is to take the long road the first time.

I came to that realization about four or five years ago. I had been looking for a shortcut to being a better artist for a long time. I was learning all of these things that were just background noise…just atmosphere. None of it was, at least for me anyway, true to what I wanted to learn.

I wasted a decade looking for a shortcut when I finally realized that if I just kept my head down and really focused on taking the long road the first time, I would have been there years before. 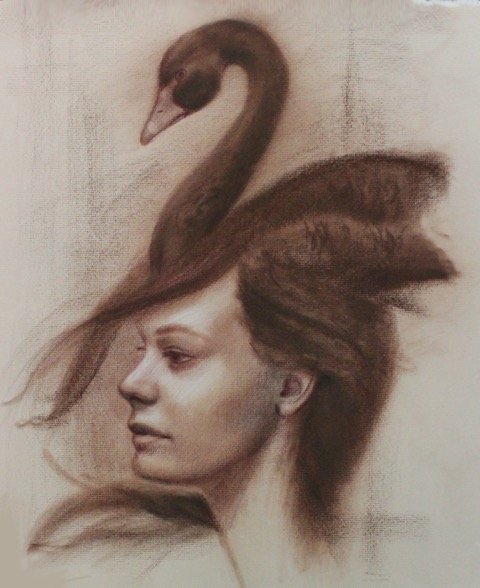 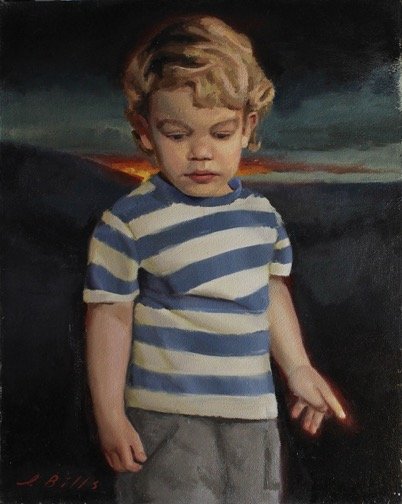 You don’t pick your style. It just happens through time and repetition.

There’s a lot of artists that sort of think it’s a foregone conclusion. They’ll look at another artist and say “That’s what I want my style to be.” And that’s false. You’ll never be successful picking something like that up front.

For me, it was a matter at just wanting to be better technically.

At this point, I would like to think if I have a style or signature, it’s the level of technical ability that I bring to my tattoos. It’s almost like I’m trying to not have a style. I’m just trying to render things as accurately as possible, focusing more on a light and form perspective. Where as a lot of people who do realism thinks its all about the flash, all about the details and the little white highlights everywhere.

The thing is, it’s the big shapes that makes something look realistic.

There’s a lot of painters that paint realistically, but if you look at what they paint, a face will have no eyelashes, no nostrils, or it might not have a clearly defined iris, but it’s the big shapes that you put in there that make this thing look like you have volume and light is hitting it. Not that I don’t put any details into my work, but that’s literally the icing on the cake.

You definitely want more cake than you want icing.

If you can build a good form and then put a few little textures, surface details on it, I think that will read better than anything that has a lot of flash and a lot of texture but no big shape. 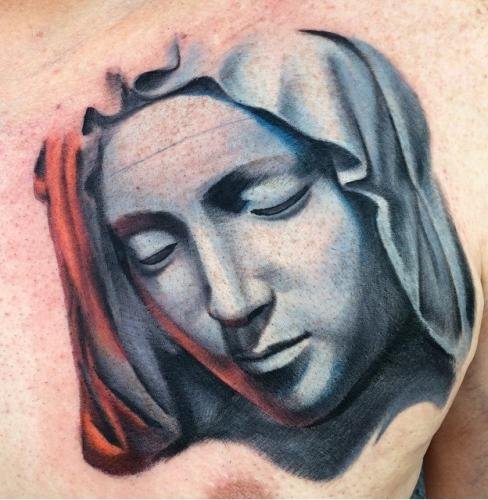 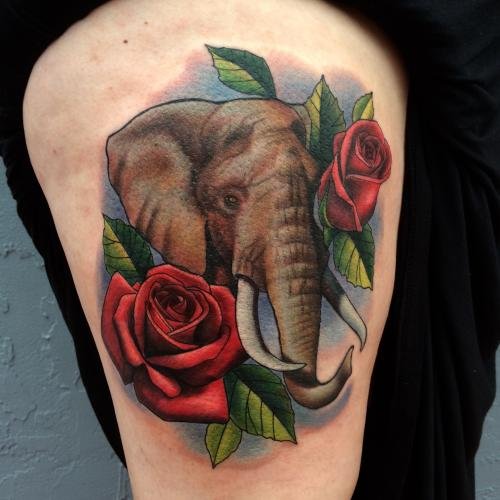 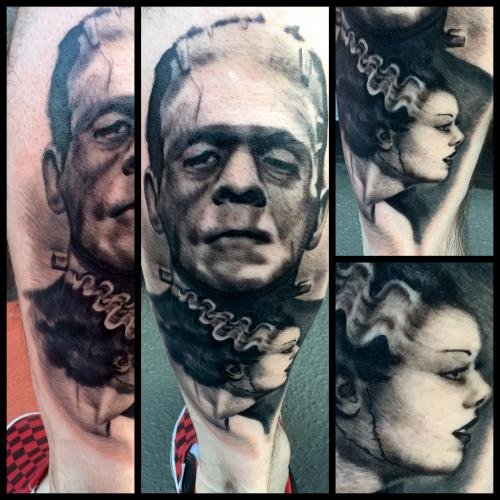 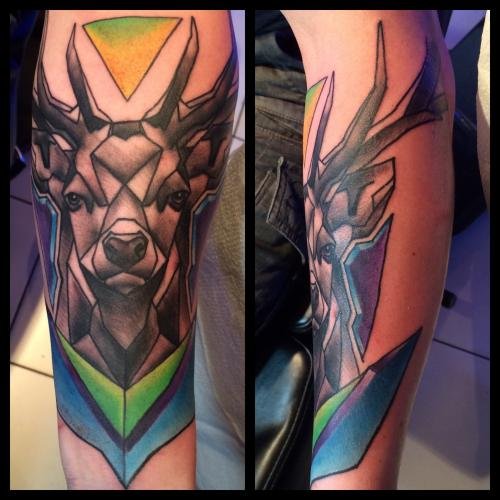 Tell me a time where, when you finished the tattoo, you felt like you were really proud of it.

There were many tattoos over the years where there was sort of a leap.

I remember when color realism started to take off in the business. I worked under an artist who was an exceptional black and gray portrait artists. They didn’t schedule portraits with anyone else but him, but he didn’t understand color the way I did, so that was my in.

I remember there was one in particular where there was a skull, but I did it in color. I did it from a photo reference. Instead of trying to interpret it, all the shapes and all the values where as true to the photograph as I could make them.

I remember when I was done, all of my co-workers, both my bosses, everybody was looking at this piece and was like “Holy shit, how did you do that?”

This was one of the first times I remember breaking away from what I thought I wanted my style to be and doing something that makes me and my client happier. From there, I was the color portrait guy.

Instead of just paying attention to what was happening in the tattoo community and trying to be a reflection of that, I started looking outside to fine art like Caravaggio, Rembrandt, and other old masters. And trying to learn what it was about their drawings and paintings, their art in general, that was so successful and how I could try to emulate that.

How would you like to see the tattoo community to change?

I’m glad to be a part of it, but I don’t own it. It’s sort of it’s own entity and we’re just the tide that rises with it.

Not to say that realism is better, but what we’re doing is a visual representation that starts with reality. The more you understand about drawing realistically, the better you can be at doing any other art form, whatever you want to call the style you’re doing. The better your technical skills, the better artist you’ll be.

What do you want to be remember for after you retire from art?

One of the reasons I like fine art, as a contrast to tattooing, is that…there’s a couple companies that will cut off a piece of your skin in fa. There’s no way to preserve the work of a tattooer. One of the many reasons why I also enjoy creating fine art is, that’s the part of me that’s going to last.

I want to be a good enough artist to where the art I create will be respected enough that people want to persevere it—whatever that means.

If that means my work ends up in museums or with just a few people that love them, it’s ultimately just that I want to know the amount of time I spent here wasn’t for nothing and at least some of the things I create will survive. 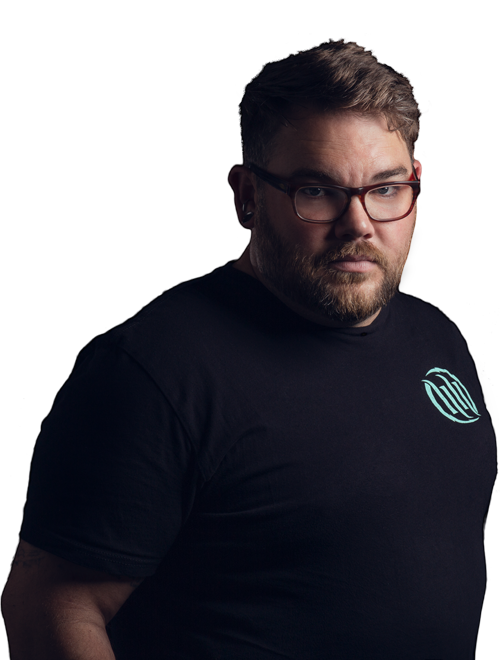 Request an appointment with Isaac

All the wrong things.
Sometimes, it’s about learning what not to do that makes us...
Manager, plumber, electrician, handyman.
For the last 5 years, Todd Parker has given his all and then...
Tattoos are therapy.
“I want people to know they can come here to get a tattoo...